This can be a very diverse charter as there are a range of good fishing areas to choose from using light-medium tackle for a variety of species including large Sharks. Various game fish such as Yellowtail, Snoek, Skipjack & Katonkel arrive in massive shoals off Cape Point annually.

Yellowtail is an esteemed game fish that is a fast and powerful predator and gives an excellent fight. Snoek is a fierce shoaling predator that is well respected by all who catch it and this is great fishing for the whole family. Cape Point is also known for good reefs that produce Red Roman, Cape Salmon, Hottentot and a range of Rays, Skates and Sharks. Alternatively, we could head into False Bay towards Seal Island, world famous for the great white Shark breaching predations and home to a population of up to 70 000 Cape Fur Seals. This dense population of Seals, in turn, attracts a large number of White Sharks and one can often see these phenomenal apex predators clear the water while hunting their furry prey.

In and around this area, we target fish species such as Kob, Steenbras, Roman, Yellowtail and a wide variety of Sharks. All Sharks are caught on a strict catch and release basis.

False Bay and around Cape point is home to an abundance of marine wild life and is one of the few places where you can witness such an extensive range of marine life. On our charters, we often encounter pods of Dolphins, Southern Right Whales, Cape Fur Seals, African Penguins and the Great White Shark. We also encounter Humpback & Brydes Whales and the occasional Orca can be seen hunting Dolphins along the spectacular coastline. 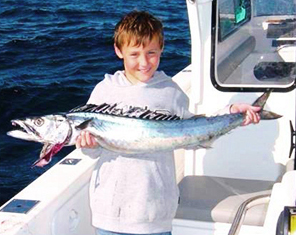 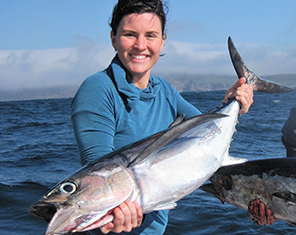 Our dedicated crew with years of experience have a deep understanding of fishing the local waters & take pride in offering excellent service, giving you the best chance of landing your very own prize catch & making your fishing adventure an exciting & memorable one.