The Cape waters have a worldwide reputation for Tuna fishing. The sheer power of a big Yellowfin, a true bluewater game fish, has to be seen to be believed and the memories of the powerful runs of a decent size Yellowfin Tuna will live on in any anglers mind forever. From October, oceanic tunas start arriving in large shoals off Cape Point and continues until June.

On this charter we target Yellowfin, one of the world’s toughest fighting fish, Big Eye and Longfin Tuna. Yellowfin and Big Eye Tuna of over a 100 kg’s are landed but the average size of the fish is 50kg – 70kg. Southern Bluefin Tuna have recently made an appearance in the Cape waters and the occasional one has been landed 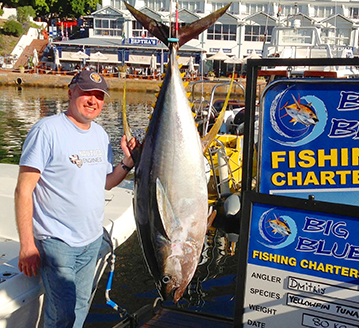 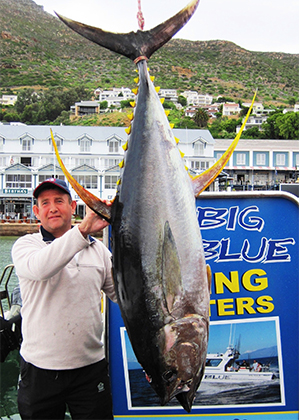 The best method to catch Tuna is either by trolling lures behind the boat or creating a chum line and fishing with bait while drifting in the current. Often, other pelagics like Skipjack, Katonkel and Dorado (Mahi-Mahi) are landed in the same area.

Hooking up with one of the rulers of the blue world, the Mako or Blue shark gives a great fight but these are caught on a strict catch & release basis only. Although not common, Marlin can be caught at certain times of the year.

We use top of the range Shimano Tiagra reels and Black Magic stand up harnesses because of their comfort, quality and proven durability when fighting fish.

This full day fishing charter generally begins early when we cast off from our Private Marina and head up to 40 nm (approximately 75 km’s) from Cape Point to the tuna grounds. 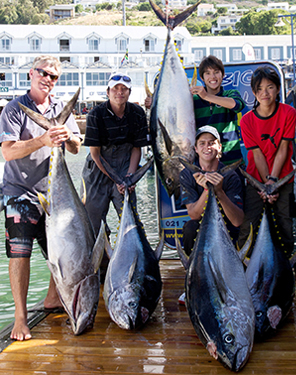 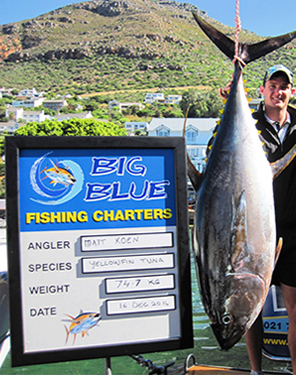 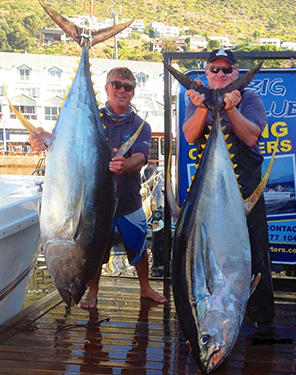